A downloadable game for Windows

Week Sauce August Entry. This is rather a tech demo, as we struggled a lot with the tools and the workflow in UE5, which was new to us.

You can walk and jump around, fall off the world and find broken colliders.

Loosely inspired by this cover by Céline Veltman.

If I were a box artist, I'd be honored to see someone capture the feel of my vision and build a vibe-catching game with music around it. Artistically, it's a bit more sterile than the cover, but that's the one of the beauties of art: re-interpetation and evolution.

I actually enjoyed my time in the ruined world, even though I quickly fell off the bridge. I still wanted to roam a bit, and that says a lot for a demo with no apparent gameplay!

On a side-note, it felt like an 80's cyberspace representation, only that for once, there was nothing horrible going on 😁

Technology-wise, there's already a great sense of global illumination (I say "a sense of", the meteors don't seem to illuminate anything), especially from below the bridge. I just think the shadow edges of the large buildings are very hard (they soften only slightly), so the sun is very close to this planet I guess? 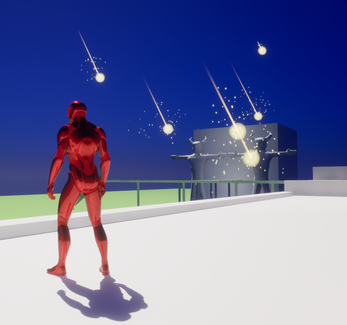